It seems one peril of Toronto’s new craft beer fascination is that products that were once easy to come by during seasonal releases have become decidedly less so. I think every release for the past year or so has seen at least one inviting product – usually one of my beloved stouts or porters – horded and off the shelves before I can make my way south to a real LCBO. This time around it was Box Steam Funnel Blower that seemed poised to escape my grasp. I had a lunch with some old friends in Mississauga and hit up the website to find a few items noted as being available at Orion Gate. Sure enough, there it was. So anticipated was it that I bought two, along with the Ayinger Celebrator noted below, and an Aecht Schlenkerla Rauchbier – the smoked meat beer, for the uninitiated. 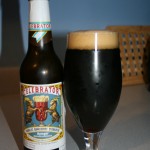 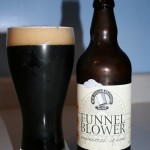 So there’s a look at the rest of this week’s beers:

Brouwerij Van Honsebrouck Bacchus: A 4.5% Flanders Red Ale from Belgium, obviously attractive in that it was entirely wrapped in sexy paper. This is not a style of beer I’ve developed a taste for as of yet, unfortunately. I understand it’s well thought of and well made, and I did drink the entire thing. It’s almost cloyingly sweet, and as is often the case, warmed to something more enjoyable than what came out of the fridge.

Ayinger Celebrator: A 6.7% Doppelbock from Germany, extremely well rated, and something I was excited to try. I wasn’t disappointed. You can see the pour was quite dark, and it was so flavourful and thick my brain didn’t want to believe it was a lager. The further through this journey I get the more I find myself enjoying bocks, and specifically doppelbocks. This guy is probably my favourite doppelbock yet, up there beside Paulaner’s.

Box Steam Funnel Blower: A 4.5% Vanilla Porter from the United Kingdom, and what appeared to be the catch of the autumn released based around the craft beer community discussion. I was.. underwhelmed. Granted, the pour burst forth with vanilla, and the aftertaste is something to behold. But the beer itself was light, quite bubbly and lacking in any sort of depth. It was almost watery.

So that’s 1,065 through 1,067. I need to pick up a Cask Days ticket, no doubt those few hours will rocket through this list for me. And I’m hopefully close to a Night of Stouts with some friends where I can rid my cellar of some pretty remarkable darks.