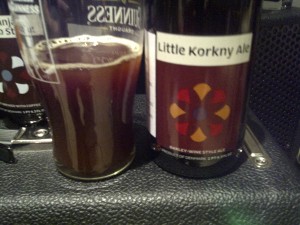 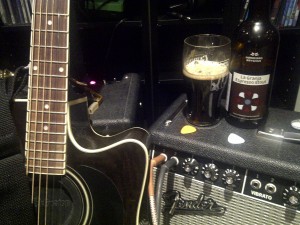 The Beer: A 6.5% IPA from København, Denmark
The Location: Jay’s place

This sweet stout from Denmark is well regarded enough on its own before word got around, just prior to the announcement of its pending arrival, that a shipment of maple syrup from Frank Higgins in Combermere, Ontario had made its way to the Nørrebro Bryghus brewery. Turns out that the brewmaster was going to offer a special treat to Ontarian craft beer fans – a version of their La Granja Stout made with real Ontario maple syrup! Now THAT’S some beer love right there.

She poured near pitch black, a little brown around the edges, and with a very nice, foamy tan head on top. The aroma was sweet with a boatload of coffee, inviting and exciting. The taste was mostly coffee, subtle sweetness that isn’t necessarily discernible as maple syrup, but is balancing and pleasant regardless.

It was right around this time I toqued up, threw the acoustic seen in the pic on my shoulder, and saddled up to a microphone for the first time in my long career of amateur guitar noodling to blast through a few rounds of covers on “Waiting for the Sun” by The Jayhawks. My tasting notes added but one final farewell to this review: “I ROCK!”

Clearly these beers were taking hold.

In 2010 the LCBO began running brewery features, special limited releases of a series of beers from a single brewery. The first was with Dieu du Ciel out of Montreal, and the second with Harviestoun’s Ola Dubh series. Not only was this notable for the rarity of the beers involved, but often for the price. The Ola Dubh 40 — Harviestoun’s Old Engine Oil beer aged in 40-year-old whisky casks — was individually numbered, served with a small crest and in a handsome box, and priced at $19 a bottle. This release would see a $23 bottle of barley wine, and in this case, a $7.50 bottle of IPA.

As noted in the pic we completed the eating portion of our drinking night, and would now commence with the guitar portion of our drinking night. My classy Fender Reverb Deluxe served as a ghetto coaster for this amber IPA with a whispy white head. Our second straight IPA that came strong on the malty sweetness in the aroma, with a matching light malty flavour spiked with black pepper-like hop sharpness. A fine IPA, albeit possibly slightly overpriced for what it was. Good way to kick off a little jamming, though.