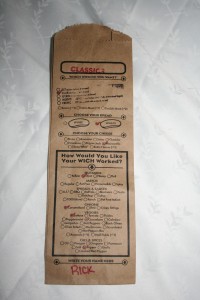 So I type this from the free Internet in my Pricelined hotel here at the Sheraton Phoenix Airport Hotel Tempe. Yesterday wasn’t too eventful – a late start but we made it to the airport in Buffalo on time, having had no stop for food at that point. Near the gate we found a restaurant called Which Wich that I hadn’t heard of before. Interesting concept where you grab a bag, use a Sharpie to select what you want, hand it to them and they make it for you there, then slide it into your bag. Tasted pretty good, loved the idea of the place.

I have to note that Southwest is all you’ve heard they are and more. They’re the airline Westjet patterned themselves after, which is noticeable, but they really take it beyond. From walking people’s children around the plane to singing through the PA, even to just plain old jokes and fun. We were even allowed to store our guitars in the overhead containers because the steward noted he also played and he’d never let someone touch his instruments. Lucky us. 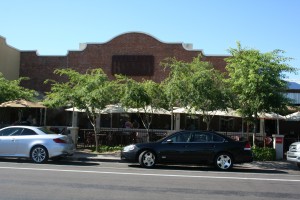 We were barely here when we headed down to the Four Peaks Brewery in Tempe to meet up with Nick Jasken. Nick and I have a storied history dating back about 16 years by our best estimate, but this would be our first real meeting. Back around 1994 we connected over a mutual love of the band Extreme, and from mailing lists to message boards to newsgroups just built up a rapport for some time. Our contact broke apart until I found his MySpace Music one day and realized that we were both bald guitarists who’d moved on to become big Roger Clyne & The Peacemakers fans. So long story short we met up, had a great evening that lasted about five hours of just conversation. Four Peaks has awesome food and even better beer, I managed to try the Bleu Light Special Burger and the Kilt Lifter, Hefeweizen, Hop Knot IPA, The Raj IPA and Oatmeal Stout, all quite nice. Ended the night with a night swim and hit the sack at what was almost 2am Toronto time for the end of a long day.

So today? Today will be the Diamondbacks game, and a pretty cool story to tell courtesy of our old friend KP – check back tomorrow!