It was back in May of 2007 when I crossed paths with a college friend, Kurt Theil, via Facebook after seven absentee years. We caught up via Facebook Messaging, and he asked if I homebrewed. I said no and told him to teach me. His response: 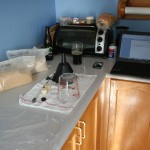 In these past five years we’ve caught up, I’ve brewed with Kurt at friends’ houses, I’ve sampled some of the best the world has to offer, and as he requested, purchased both Homebrewing for Dummies and Extreme Brewing shortly after his message.

Five years later, I finally put them to use. Equipped with two 5-gallon carboys from my last two birthdays (thanks, Kim!) I hit up Toronto Brewing for the remainder of my goods. I had perused different recipes and decided to pass on the typical first brew pale ale to attempt a stout, my favourite type of beer. And further to that, having only extract brewed with friends, took the plunge into hybrid specialty grain and extract brewing. 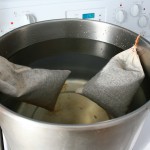 So the batch started with 0.75lb of roasted barley and 0.5lb of black malts, cracked, added to steeping bags, and tied into the brewpot full of water. The batch was stirred at times as it made its way to 170 degrees where it was removed from heat and I added in 3.3lbs each of dark and light dry malt extracts. I got them back on the heat, brought them to a boil, and then added an ounce each of Northern Brewer and Nugget hops. These early additions are meant to add bitterness to the brew, and are fairly traditional stout hops. 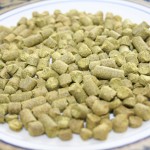 After 30 minutes of the 60-minute boil I added the aroma hops, in this case an ounce of East Kent Goldings. My cousin, Mark, had recommended them as they’re very British in their usage, and I had been oddly constructing a bit of a British oatmeal stout as it was. Good thinking. 15 minutes later it was time for 2 cups of dark brown sugar, and with 5 minutes to go a bag containing an ounce of whole leaf Cascade hops. These are not conventional for an oatmeal stout by any means, and at this stage of the boil are intended for aroma only. My hope is to offer that unique hop aroma where it’s not expected, although I’m not sure how it will come through in the end. 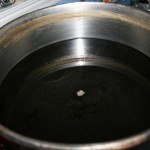 Once the boil was done I cooled it and prepared the British Ale yeast for use. Using a large funnel I got the wort into the carboy, pitched the yeast, added diluted water, and “rocked the baby” – a process of holding the carboy and gently shaking it like a British nanny. At this point I moved the carboy to the basement to rest for a week in the laundry tub. Or so I thought. 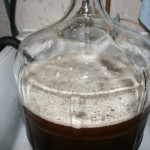 No fermentation. No bubbles. No anything. So I made the wise observation that, temperature wise, my basement may not be cutting it. Then it hit me, the very bathroom that has plagued me for 12 years could be the solution. See, my bathroom rests above a porch that acts as a wind tunnel. Come the winter months it turns into a fridge, highly uncomfortable for morning showers and the like. But perhaps perfect for fermenting beer?

Boy was I right. The next morning I opened the door to hear an actively bubbling beer, a giant white and tan “head”, and an airlock that had blown clear off and sprayed beer all over my shower. As I type this, four days later, it continues to bubble, granted at a much slower pace. So things appear good. Stay tuned, more to come…

Super quick post today, partially because I have some exciting news to share, but mostly because I’m trying to get back into the habit of posting regularly.

I just placed an order with www.torontobrewing.com for the remainder of the supplies I need to brew beer at home, as well as the malts, hops, and yeast I’ll need for my first batch. This will all become handy on Saturday when I set out to brew my first batch of beer made entirely on my own. I’ve been wanting to do it for a heckuva long time now, and thanks to a second carboy acquisition for my birthday from my sister, I’m ready to give it a go.

So for those that care about these things the plan is a grain bag filled with roasted barley malt, black malt, and some President’s Choice Organic Oatmeal. This will be chased with 3.3lbs each of two types of dry malt extract: Dark and light. For hopping I’m going with Northern Brewer and Nugget for bittering, East Kent Goldings for flavour, and whole leaf Cascades to finish. I’m currently planning a cup each of brown sugar and dark molasses as I’m a fan of high alcohol, sweet stouts.

If all goes well this batch should be ready to taste in about three weeks, and ready to share in about five. A quick, simple batch to start before I start my extreme brewing operation from the confines of my kitchen. Here goes nothing…