I know I’m late and I know I owe a day 2. I’m saving day 2 for last, it was the sweetest day. But skipping ahead to the end I’m clearly home and back at work so all things ended well. But for the sake of those contemplating Arizona/Mexico trips in the future I soldier on. 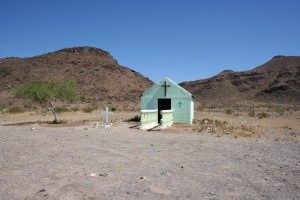 Day 5 was our road day, when we’d escape Rocky Point (sadly) and make our way to Tucson before closing off in Phoenix. Day 6 would be a full day of flying due to time changes and drives so this was effectively it. One item missing from my goals was an authentic huevos rancheros, a Mexican breakfast roughly consisting of fried corn tortillas under hard fried eggs and topped with plenty of a tomato and chile sauce on top. On the side, some beans and fresh tortillas. We decided to take a chance and stop at a breakfast place we’d seen the night before called Rosy’s, and inside were met with a largely Spanish speaking audience who seemed to be skeptical of the two gringos. I’m not sure their suspicion was alleviated at all by Paul’s efforts to have a side of margarita with his breakfast. That said, it was incredibly delicious and just what I’d hoped for before hitting the road.

The route home saw a few stops as I’m a big proponent of “make the journey as good as the destination”, but perhaps none more key than a roadside miniature chapel I’d found online before our trip. We stopped to snap some pictures of the chapel and the nearby surroundings, then headed inside to light a candle in memory of our catcus-loving/growing grandfather who passed away last year. It was a good moment and we were back off again. The trip over the border was relatively uneventful with, again, two dudes with guitars having spent a few days in Mexico apparently no cause for concern to any border officials, be they Mexican, Canadian or American. Once across it was off to Why, Arizona where the trip shifted to an eastward haul along the border to Tucson. 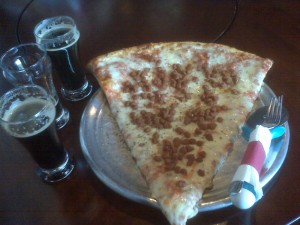 So here’s the thing – Arizona has an illegal immigration problem. And by immigration I mean they just run in and hide amongst the cacti. Without getting political (because Lord knows I don’t like to do that) I’m going to say those of you whining about Arizona’s new laws likely have no idea what you’re talking about, and all I’ll do is encourage you to actually do some research. Suffice it to say we crossed paths with no fewer than 25 border guards during the couple hour drive, they were everywhere. Now, arriving in Tucson our first stop was 1702 Pizza + Beer, a place known for oversized slices of pizza and 52 awesome draught taps. They did not disappoint. I had a simple cheese slice with chorizo and, as driver, three samples of some awesome stouts: Dogfish Head Chicory Stout, Avery The Czar and Ommegang Chocolate Indulgence. Paul, bless his soul, did his best to conquer a well-packed calzone with a Titan IPA followed by samples of Dogfish Head Burton Baton, Coronado Idiot IPA and Green Flash Imperial IPA. While he was unable to finish the beast of a calzone he was congratulated by the owner of the establishment for having come about as far as anyone ever has, quite the accomplishment.

From there it was to the PIMA Air & Space Museum, who had assured me on their Facebook page they toured until 4pm. However, we arrived at 3:30 to be told there were no more tours. Bit of a tick-off. We drove around the boneyard and got a chance to see some of the planes, but we’d really hoped to see it. It was back to Phoenix from there to stop at the Heart Attack Grill for a milkshake. 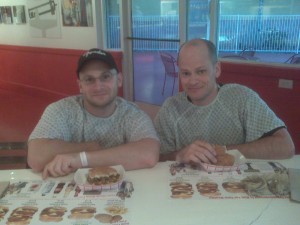 We sat down, the “nurse” threw hospital gowns on us and asked us for our order. We ordered shakes and were told they don’t serve shakes. Yet another lying website! So we went for the gusto and ordered Bypass Burgers; the single version, despite the profane taunting of our “nurse”. For those unaware the only things they serve here are 1/2-lb burgers in increments up to four patties, bottomless fries fried in trans fat, colas, beers and unfiltered cigarettes. Now, to be clear, these burgers are disgusting. They’re fatty and nasty and the bun was smeared with something oily and upsetting. We ate, we got a pic, and we got out with only one additional stop to meet a new friend for a drink on the way.

Which, thusly, ended day 5 and, effectively the trip. Stay tuned, however, for the story of day 2…