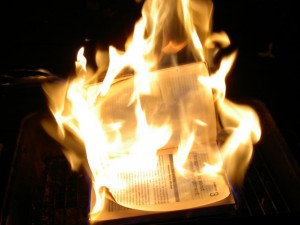 I make no secret of the fact that I’m a Christian. I’m sure some might call me an apologetic due to the amount of time I spend researching, reading, analyzing. Like everything I do, I approach my Christianity with a huge dose of analysis. My mom likes to remind me my first word was not “mom” or “dad”, but apparently, “what’s that”. Add to this the fact that I absolutely adore a good debate and I’ve become a willing participant in many discussions, be they with other Christians or with atheists, often in regards to the deeds of those who claim to be Christians themselves.

So what are my thoughts on Terry Jones and his Dove World Outreach Centre, who’ve proposed marking the 9th anniversary of the World Trade Centre bombings by burning a pile of Qur’an? I think it’s a perfect example of why we never accept someone as Christian because they say they are. The Bible tells us to do a lot things, from spreading the word to non-believers to working for the benefit of the least of us. It doesn’t teach us that the desecration of items sacred to others will somehow improve the understanding and acceptance of items we hold sacred. Do Terry Jones and his parishioners feel their Bible is somehow unable to defend itself?

There’s one simple fact of human behaviour and understanding: That we aren’t reached through irrational acts of spite or anger. Yet society at large seems unable to understand or accept this. We tell people who to vote for by belittling the opposition. We tell people what movies to watch or music to listen to by insisting what they listen to isn’t good. And, apparently, some of us feel burning the Qur’an will somehow awaken others to the truth we find in our Bible. Maybe we should extend a peaceful hand and an offering of selfless compassion instead? Maybe people will vote for our candidate through proof of action and educated promises? Maybe people will listen to your music after you provide them a CD to check out? And maybe Terry Jones and the Dove World Outreach Centre would find a better way to get back to the basics of what their God teaches – to spread the word in love.