Dangit, I need to get in the habit of posting here. If I’m going to stand up in a meeting with people and proclaim my blogging longevity I need to actually own some semblance of regularity here. So I attempt again to not get bored of blogging and have something moderately interesting to say.

I had Friday off work, and I’d like to say it was for some grandiose idea but really it was to BBQ, drink, and watch Batman. I kinda just wanted a day off and my friend, Mike, offered up his home. I decided to try making a rustic-style salsa with traditional ingredients as a bit of a snack around the BBQ Mike would be producing. That meant fresh tomatoes, jalapeno peppers, cayenne peppers, garlic, limes, and cilantro: 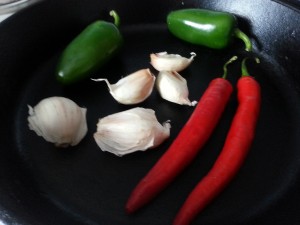 Garlic and peppers roasted in a cast-iron skillet

After washing the veg were laid – notice the papers on the garlic, because we’re going to roast them inside there – in a cast-iron skillet over a slightly less than medium heat. They would rest here, flipped periodically, for about 3o minutes until everything was black and blistered. Once they’re at this stage, put them in a bowl and seal it with plastic wrap to allow them to steam their skins free. Once they’ve done that you can easily peel them all, seed the peppers, roughly chop and toss them in a blender or food processor, pulse away and turn into a bit of a paste.

In the meantime, I took some fresh vine-ripened tomatoes, sliced the top off, cross-hatched the bottom, coated them in grapeseed oil and salt, then into the oven uncovered on 300 degrees for 45 minutes. Once that was done, they looked something like this: 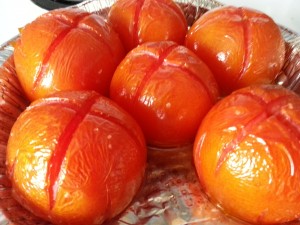 The final stages are fairly easy – puree the tomatoes (I only needed half of these for the batch I made) with the peppers and garlic, then fold in some crushed tomatoes (about a 15-oz can), the zest of a lime, the juice of a lime, and about half a handful of chopped cilantro. If you were being authentic you might add a spanish onion, best done by dicing, rinsing in cold water, and allowing to dry. And that provides a perfect rustic salsa, Mexican style, perfectly paired with blue corn chips. Good luck! 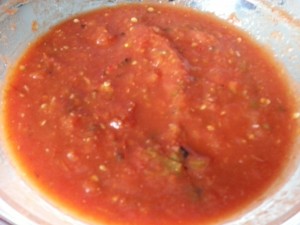 Thanks to TLN I can finally catch episodes of ‘Mexico – One Plate at a Time‘ again. It’s been two years since PBS stopped carrying it on our local affiliate and I’ve missed my weekly or twice weekly looks at authentic Mexican food. After a couple weeks of catching up I found myself, once again, inspired to get cooking, so last night I pulled out my associated Rick Bayless cookbook and sought out some enchiladas to create. I settled on Enchiladas Suizas, typically filled with roasted, pulled chicken and topped with a sauce of tomatoes, green chiles, and cream. Why not?

I coated chicken thighs in salt, pepper, and ancho chile powder and started cooking them in a cast-iron skillet while getting some onions sauteeing in bacon fat. That’s right, I don’t mess around. 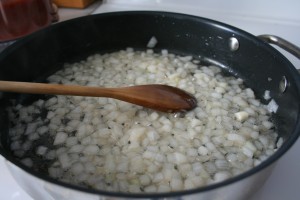 Once they were translucent I hiked the heat up until everything started sizzling and browning, then dumped in a blended mixture of whole, roasted tomatoes and three roasted jalapeno peppers. I stirred this mixture for almost 20 straight minutes until it had reduced and darkened in colour, then added in some chicken stock and let simmer for another 15 minutes. Finally, a dousing of whipping cream to make it authentic. 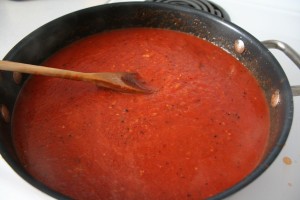 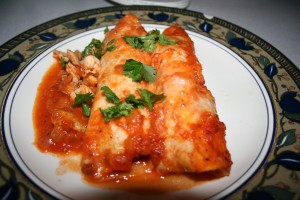 So not having posted in months, and rarely discussing anything around here anymore, perhaps now is an odd time to just announce in the early parts of a food blog that having recently started a company doing digital and social media marketing for friendly companies, I’ve recently taken Creemore Springs on as a client. Good folks up there in Creemore. Part of my duties there are to manage the Facebook and Twitter accounts, and in doing so I’ve recently become aware of Brownstone Bistro & Bar in Toronto. One can excuse my lack of knowledge of them earlier as they’re unfortunately located a few storefronts from barVolo, and thus it’s understandable I’ve never made it that far up the street before. My friend, Katie, had recently expressed interest in starting a baking blog and I was leaving a meeting with my old colleagues at 58Ninety, and thus a dinner gathering seemed a great idea. An even better idea? My first experience at a Winterlicious menu.

For those from areas outside the centre of the universe, Winterlicious is an annual Toronto event where restaurants across the city feature fixed price menus for lunch and dinner at reduced prices (and often sizes). It’s apparently popular, not that I’d know, but Brownstone was taking part and it was $4 Creemore night. Decisions make themselves at times. 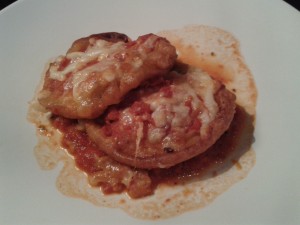 We passed up Mushroom Strudel with brandy cream sauce and PEI Smoked Salmon Salad with Tropea red onion, capers, English cucumber, and balsamic to opt for Aubergine Parmigiana – Eggplant, Compania mozzarella cheese, and tomato basil sauce. It was an excellent appetizer. Perfectly cooked, spiced with a deft hand, and resting on a very nice tomato sauce. 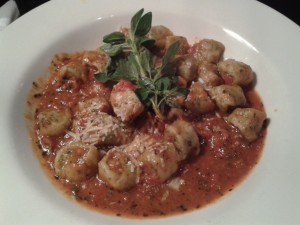 Coq Au Vin and Filet of Sole in lemon caper butter sauce were inviting, but Yukon Potato Gnocchi with Savoy spinach, parmigiano, and roasted tomato sauce won out here. It was a well-sized portion with an obscenely sized garnish. I’ve only recently developed a taste, and possible fascination, with gnocchi and it’s many variations. Texture these were spot-on, with a bit of give but feeling like a dough. Taste wise they needed a salt and perhaps a bit of the spice that rested on top, but the sauce was rustic and tasty. 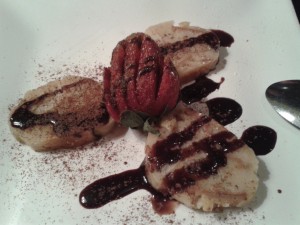 I never gave a passing thought to Banana Tempura with vanilla Ice cream, paused briefly on Au Jus Pear with dusted cinnamon, and then settled on Bread Pudding in chocolate sauce. I have very little experience with bread pudding, effectively beginning and ending with a Young’s Double Chocolate Bread Pudding I made for Easter a year or so back, inspired by Chuck’s Day Off. Both of us felt a bit saddened by the sheer lack of dessert on the plate, as evidenced in the picture above. Tasted fine, but I’d have hoped for a slightly larger presentation with a better chocolate sauce. But I’m also a dessert freak, so results may vary.

All told, I enjoyed my first Winterlicious experience, and I was pleased with the service, atmosphere, and food at Brownstone Bistro & Bar in Toronto. If I wasn’t such a beer whore I’d probably have made it there earlier, and I think the future holds more than a few stops for lunch and dinner there. I just may grab my drinks a few doors down the road before I get there. :)

Add Domino’s to the ever-expanding list of fast food chains introducing healthy and artisan menu items. Below the fold you’ll find their new ad featuring lovable Fabio Viviani of Top Chef as the fumbles to introduce Domino’s Artisan Pizzas through his trademarked broken English. These pizzas are made with hand-stretched crust and topped with your choice of Spinach & Feta, Tuscan Salami & Roasted Veggie or Italian Sausage & Pepper Trio. Best of all? Only $7.99!

I’m going to ignore the use of stereotypical “foreigner who can’t speak English”, that never gets old. Nor ask questions like “if these are hand stretched and artisanal then what are their supposedly improved regular pizzas they spent the last two years promoting?” I’ll simply ask the question “can you make an artisan pizza featuring salami from the Tuscan region of Italy for $7.99 at home?” Of course you can’t. Nor can you make a burger out of prime rib for $3.99, which hasn’t stopped A&W from releasing their $3.99 Grandma Prime Rib Burger.

Perhaps the only thing worse than trying to convince an uninformed public that you’re delivering them real food for discount prices is trying to convince me you’re healthy. Burger King is now adding salads, oatmeal and smoothies to their menu to compete with McDonald’s and Wendy’s, they of the lettuce dredged in bleach and 500 calorie toppings.

Perhaps fast food chains like Domino’s can stop wasting time introducing artisan pizzas that won’t be here in two years and spend more time focusing on what brings people to Domino’s in the first place – inexpensive comfort food of questionable nutrition. Possibly without the racist ads as well?

We woke day four in our discounted hotel for a quick pack-up before breakfast. As I finalized the game of Tetris that is our car one of my longest standing friends, Brent, wandered up to the car. Somehow we’ve managed to cross paths every few years since high school ended and we went our separate ways. Sadly, due to my inability to get in the night before our only opportunity to meet would be for a Cora’s breakfast. We, as always, caught up and learned a few new things, then sorrowfully discussed how we hadn’t had the chance to hit Pump House Brewery as planned. And then we realized that there was really nothing stopping us from doing it right then, after our eggs and bacon at Cora’s. So we did! I did the flight of Blueberry Ale, Cadian Ale, Fire Chief Red Ale, Scotch Ale, Special Old Bitter (SOB), Pail Ale, Muddy River Stout and their seasonal, Raspberry Weizen and we finished our re-group with a walk along Moncton’s waterfront. It was a handshake and we were off, next stop the Confederation Bridge to Charlottetown.

Ah, save for one pit stop. Adding 30 minutes or so to our route gave us two sweet options. One, the chance to hit the bridge via the Acadian Highway, cutting along the waterfront that provides an excellent view of PEI from the mainland. The road was rough but I found the view worthwhile. Second, the opportunity to swing through Shediac and see the World’s Largest Lobster. You can’t pass crap like that up when given the chance pop over to these guys. And so with a shot of my inappropriate beard groping of the statue we were off to Confederation Bridge.

Word to the wise, PEI has it right. Going over, free! One long, 13km free bridge ride over, but if you want to go home again, $42.50. Keep that in mind. We made our way over a bit later than expected (par for the course this trip) and texted our hosts to say we were heading straight to the restaurant. Mary selected The Gahan House, which I’d tried on my earlier trip in May. I’d recommended the fish and chips to her and she was ready to try them. I, again, took advantage of being in a brew pub to get a flight of Island Red Amber Ale, Sir John A’s Honey Wheat Ale, Coles Cream Ale, Harvest Gold Pale Ale, Iron Horse Dark Ale, Sydney Street Stout, 1772 India Pale Ale and a new Oyster White Ale seasonal, alongside the “recommended by Foursquare” Butter Chicken on Fries. All was well, and made moreso by meeting up with Chris and Crystal for the evening. We concluded our day with a trip to the same Irish pub Mary and I had found 12 years earlier on our first visit to Charlottetown, the Olde Dublin Pub, to enjoy a little Celtic music, a little more food, and some good conversation.